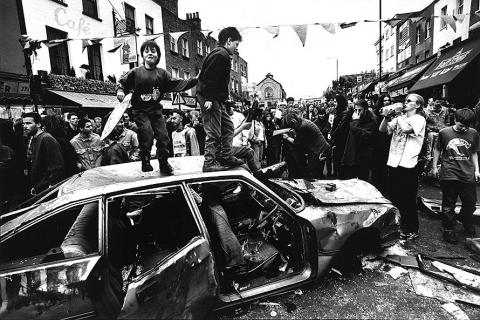 A collective resistance movement dedicated to reasserting communal ownership of common spaces, Reclaim the Streets staged its first action on Camden High Street in 1995, when activists closed the road to vehicle traffic to make way for a street party. Combining the tactics of non-violent direct action with 90’s UK rave culture, organizers kept the location secret until the last moment to preempt police interception.

„The event began with two cars crashing into each other. The drivers jumped out in theatrical road rage and began to destroy each other’s vehicles with hammers. Meanwhile, 500 people emerged from the subway station into the traffic-free street that the crashed cars had blocked, and started the party, dancing, sharing free food and meeting new friends.“

RTS’s creative methods evolved throughout the late 90’s, as their tactics spread throughout Europe and eventually to the US and beyond.